Smollett Case Reveals the Dangers of a “Cause Lead Legal System”

The Legal System in the United States is designed to place the burden on those prosecuting a crime, not those defending a crime.  Why?  Very simple – YOU ARE INNOCENT, UNTIL PROVEN GUILTY.   You are not presumed guilty or at fault unless (not until) the evidence is so high there is no other choice, but to place guilt on you.  This standard applies to those investigating (police), those prosecuting (solicitors), and those judging (the Judge).  Why is it such a hard burden – only two reasons; first it is easier to prove an action than an omission and two while some guilty will go free, it hopes to prevent an innocent citizen of a free United States from having his rights striped and his life taken without full belief it should be done.  However, is that still the case as illustrated by Smollett.<

“Believe the victim” is a moral mantra with a ferocious backlash against anyone who expresses disbelief. The emotional maelstrom surrounding the demand obscures what should be a focus of debate: What are the legal implications of unconditional belief? One is that police procedure would handle “victim” crimes, like rape or hate attacks, in a remarkably different manner than they do now.

The Department of Justice (DOJ) has funded a blueprint for changing police procedure toward “victims,” which is being aggressively advocated in America and beyond.  The blueprint comes from End Violence Against Women International (EVAWI)—an organization supported by the Department of Justice’s Office on Violence Against Women.  In the last several years, EVAWI has received over 20 grants from the DOJ for millions of dollars. The purpose is to “provide technical assistance on the law enforcement response to sexual assault and VAWA [Violence Against Women Act] forensic compliance.” EVAWI’s “Start by Believing” global campaign seeks to improve “criminal justice responses to sexual assault.”

Although the campaign applies specifically to sexual abuse, lines blur when alleged hate crimes involve slurs of f****t, as Smollett’s alleged attack did. As a practical matter, the police methodology used for one category of victim would become its approach to others. Start by Believing states, “Of course, these issues” of evolved police procedure “are relevant for any type of investigation.”

The police are to view all accusations as true, which removes the presumption of innocence from the accused and neutrality from the police.  The campaign’s Law Enforcement Action kit sketches the proposed restructuring of police ethics and procedure. The core of the kit is the manual “Effective Report Writing: Using the Language of Non-Consensual Sex,” which, like EVAWI’s Online Training Institute, was facilitated by DOJ grants. (Note: EVAWI’s kit speaks of “victims” or “suspects,” and it never uses the word “alleged.”)

The police are to view all accusations as true, which removes the presumption of innocence from the accused and neutrality from the police.  According to EVAWI, police are to “recreate the reality of the sexual assault from the victim’s perspective.” In doing so, the police report should “not highlight the changing statements made by the suspect.”

Cops Investigate, Not Decide Whether or Not to Believe

This contrasts with the current policy of seeking both inculpatory and exculpatory evidence, including shifts in story, which are made available both to the prosecution and to the defense. As attorney Scott Greenfield of the Simple Justice blog states, “Cops have no business believing or disbelieving. Crimes aren’t a matter of what one believes, but what the facts reveal.”  The victim is to be showcased; the suspect is to be discounted.

With EVAWI, the police investigator is an agent of the prosecutor rather than an independent fact finder. The stated goal is a “successful prosecution,” which means “an effective report must be prepared by the investigator in anticipation of potential defense strategies,” and it must include “the information necessary to undermine them.” The paper identifies the three main defense strategies to be countered: impeachment by omission, impeachment by contradiction, and motions to suppress.

Consider impeachment by contradiction. The kit tells police investigators to refrain from “a detailed, written summary of events” for any victim or witness who provides the particulars elsewhere. If inconsistencies arise between accounts, investigators should highlight those that “corroborate the victim’s statement.” Statements from the suspect should also feature “those that corroborate the victim’s account or provide an implausible or even absurd version of reality.” The victim is to be showcased; the suspect is to be discounted.

In cases that proceed to trial, defense counsel likely could impugn investigators and claim that alternative versions of the crime were ignored and/or errors were made during the investigation as a result of confirmation bias created by the “belief” element of the Start By Believing campaign.

Policing Is Objective, Not Subjective

Nevertheless, EVAWI takes a further plunge into the subjective. “Another strategy for effective report writing is to include details about what the victim was thinking and feeling—before, during, and after the sexual assault” in order “to see why the victim might have acted in ways that seem counter-intuitive.” If a woman appeared enthusiastic about sex, for example, her feeling of peer pressure could explain this behavior. Police work is to credit unverifiable accounts alongside hard evidence.

The possibility of a false allegation is also discounted despite due process being a constitutionally guaranteed right, with the neutral investigation of crime being its hallmark.

The Chicago Police Department “believed” Smollett in exactly the way it should have. His account of the crime was taken seriously, and every lead was followed. Red flags were not ignored, however; Smollett knew the position of a camera that should have captured the attack, for example, and the officers noted this unusual fact. Nevertheless, Smollett was classified as a “victim” until the “47th hour” when the police stopped believing.

This was the last hour of the two-day hold that police had on the Osundairo brothers, who finally claimed they had attacked Smollett at his request. The police then turned their focus to Smollett as the possible perpetrator of a hoax, not because they were anti-victim but because they were pro-fact. The investigation was textbook detective work.

It was also textbook police ethics, according to the Canons of Police Ethics from the International Association of Chiefs of Police and the Code of Ethics of the Council of International Investigators. The World Association of Detectives affirms, “We will be faithful and diligent…and to determine the true facts and render honest, unbiased reports in reference thereto.”

Following the thorough investigation, prosecutors on Tuesday dropped all charges against Jussie Smollett, an astonishing reversal that the ‘‘Empire’’ actor called vindication, but that the Chicago mayor angrily dismissed as a ‘‘whitewash’’ of allegations that Smollett lied about being the target of a racist, anti-gay attack.  Authorities offered little explanation for the decision to abandon the case barely five weeks after charges were filed. Smollett agreed to forfeit the $10,000 in bail he paid to get out of jail.

The mayor and police chief blasted the decision and stood by the investigation that concluded Smollett staged a hoax. Mayor Rahm Emanuel lashed out at Smollett, saying he had dragged the city’s reputation ‘‘through the mud’’ in a quest to advance his career. At one point he asked, ‘‘Is there no decency in this man?’’

Smollett’s attorneys said his record had ‘‘been wiped clean’’ of the 16 felony counts related to making a false report that he was assaulted by two men. The actor insisted that he had ‘‘been truthful and consistent on every single level since day one.’’

In a statement, a spokeswoman for the Cook County prosecutors’ office said the dismissal came ‘‘after reviewing all of the facts and circumstances of the case.’’ Tandra Simonton called it ‘‘a just disposition and appropriate resolution.’’

First Assistant State’s Attorney Joseph Magats said prosecutors still believe Smollett concocted the attack and ‘‘stand behind the investigation and the facts.’’ He said the dismissal “was not an exoneration.”

In some dropped cases, prosecutors will insist that the defendant accept at least a measure of responsibility. Outside court, neither Smollett nor his legal team appeared to concede anything about his original report in January, actually demanding an apology from the City of Chicago.  Meanwhile, the City and the people of Chicago are footing a $150,000.00 invoice from the investigation and a black eye for their legal system. 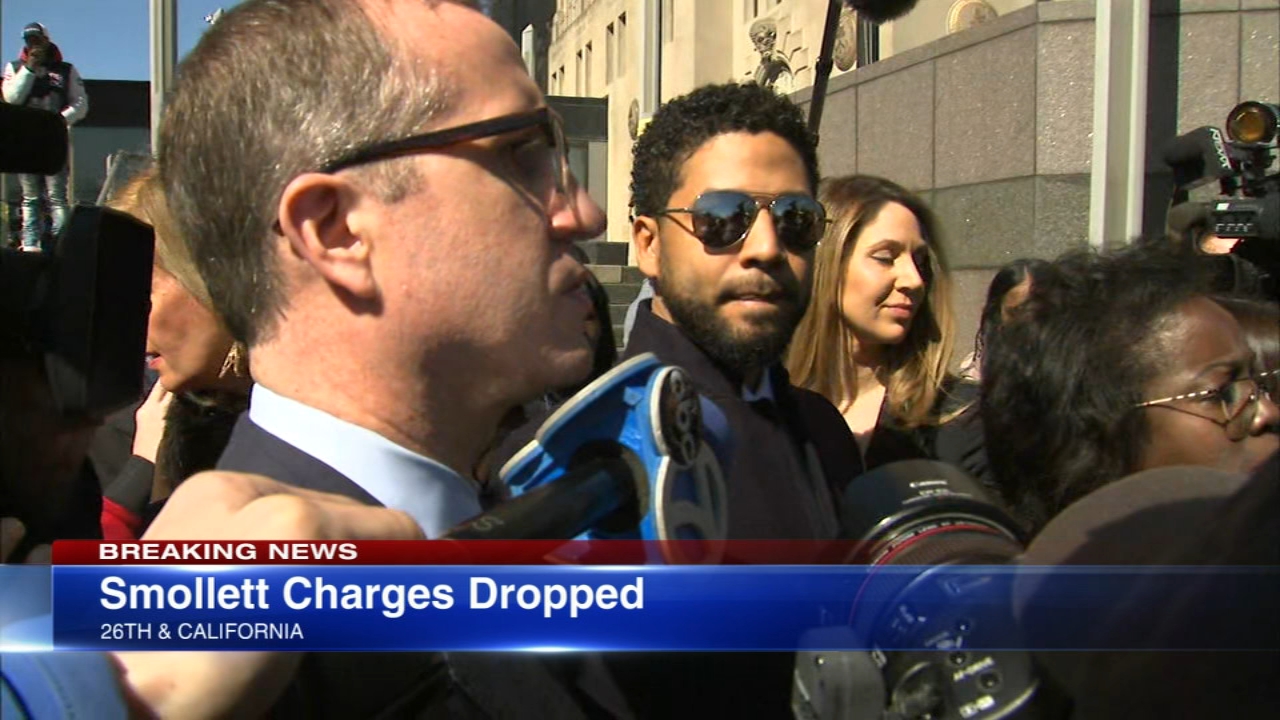 As an attorney, I have learned that I will never understand a case unless it is my case.  There are always facts and deals that I will not know about.  Further, this situation is not over as now the FBI and the DOJ are investigating.

What I can comment on is the perception of the legal system and that it is fixed.  The perception is that when a “victim” yells you must believe, you must investigate to the tune of $150,000.00, and if they are famous you must do it quickly.  If that person is claiming something politically exploitable you must use that to your benefit immediately without understanding the facts.  Then if the police actually do their job and prove it is a crime perpetrated by the “victim”, no harm or foul because you are the “victim,” we either support you or are so embarrassed we just want it to go away.

Easy lessons that clearly need to be learned from this “Cause Lead Legal System:”

1. Trust no one, because all parties have an underlining motive;
2. Everyone involved will allow their bias to lead the result; and
3. No result will be final, because everyone will want to use the case for their own gain.

How about we let the legal system be how it was designed – “innocent until proven guilty:”

1. Let the investigation conclude before making judgment;
2. Let the facts determine the judgment; and
3. If you are guilty you are punished and if you are innocent you are not.

While I can not speak highly of the attorneys in this case, and the Judges had their opportunity to rule stripped from them, I can speak very highly of the police.  For all the disbelief and the affirmation of Chicago politics, the police department stands at the pinnacle of Chicago Government.  Kudos to them for having the gumption to investigate and present the truth.