Did you know that Disney self-regulates?  They don’t have to abide by zoning laws, building codes, or even health regulations?     Could you imagine the advantage you would have in your life and business if you did not have the government preventing you from doing whatever you wanted to do.

Recently, Florida State Rep. Spencer Roach tweeted that he has been discussing with fellow legislators the possibility of repealing the 1967 Reedy Creek Improvement Act, which allows Disney World to be effectively self-governing and exempts the jurisdiction from many state laws, specifically regarding land use. “If Disney wants to embrace woke ideology, “Roach said, “it seems fitting that they should be regulated by Orange County.” 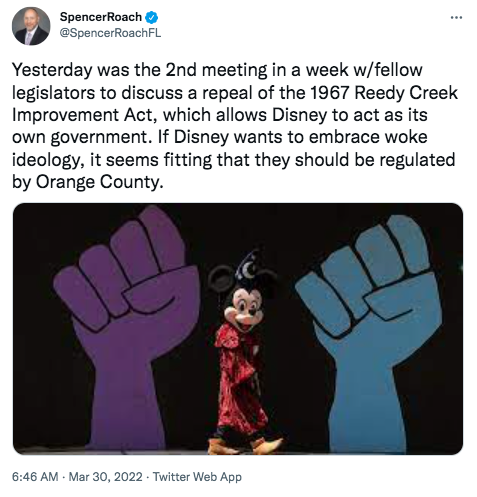 DeSantis himself weighed in on the proposed repeal during a press conference yesterday.

“What I would say as a matter of first principle is I don’t support special privileges in law just because a company is powerful and they’ve been able to wield a lot of power,” DeSantis said. “I think what has happened is there’s a lot of these special privileges that are not justifiable, but because Disney had held so much sway, they were able to sustain a lot of special treatment over the years.”

“I think in this particular case with Disney,” he continued, “I just don’t think you have very many people in the legislature anymore who are going to be able to defend a lot of what has been done over many years to really have them almost govern themselves in some of these things. That was probably never appropriate to start, but is certainly not appropriate now at this point.”

What is the Reedy Creek Improvement District?

The laws surrounding the Reedy Creek Improvement District (i.e. Disney World’s land) are actually quite fascinating. The 1967 act creating the district basically gave it the powers of an incorporated city, and also gave it immunity from any current or future county or state land-use laws.

“Without those powers,” Richard Foglesong explains in his book Married to the Mouse, “they would be forced to submit to building inspections and planning and zoning controls by Orange and Osceola counties.” With those powers, however, they could make magic happen.

“Integrating the company’s government and development arms made possible an efficient system of building regulation. Under Potter, the Reedy Creek government developed a floor building code with its own department to supervise the code…The arrangement allowed building officials to work directly with the theme park designers…Commenting on this arrangement, Potter said ‘It saved us from a lot of problems because when a design came here we knew that it was a competent design.’ The standards were stringent, such as requiring a fire sprinkler in every room, an uncommon safety feature in the 1960s. Yet, the performance standards were also flexible.”

What does it mean?

In short, the fact that the Reedy Creek government had so much autonomy was a major key to Disney World’s success. The flexibility allowed them to create plans that prioritized visitor experience, because they didn’t have to focus on appeasing lawmakers and rival special interest groups.

So, on the one hand, these legal privileges have been tremendously beneficial, and the success of Disney World is a testament to their utility. But the other factor here, which DeSantis is drawing attention to, is that this is basically cronyism. Disney World was given an unfair legal advantage over its competitors, one that it continues to enjoy to this day.

This presents us with a dilemma. How can we preserve the benefits of self-governing districts without the cronyism that so often goes along with them?

The answer, in a word, is decentralization. Rather than removing the exemption from Disney World, the “privileges” should be extended to Disney’s competitors. Every jurisdiction in the state should be as self-governing as the Reedy Creek Improvement District. In other words, the land use laws should be scrapped altogether.

Now, some may predict that chaos and disaster would ensue if these regulations were suddenly dropped across the state. But that’s highly improbable. Look at Disney World. It certainly hasn’t suffered for lack of these restrictions. In fact, we can almost think of Disney World as a little experiment in deregulation. Lo and behold, the experiment has been a great success. Why, then, should we not expand the scope of this freedom far and wide, seeing as it has proven so beneficial?

To sum up, Ron DeSantis is right to call out the “special privileges in law” that give big players an unfair advantage, and it’s encouraging that he sees fair competition as “a matter of first principle.” But if we’re going to address cronyism, we need to do it the right way, by scrapping the laws that make it possible in the first place. For those who believe in decentralization, deregulation, and free markets, this is a great opportunity to put these principles into practice and to understand creating too much law and regulation is a hinderance to actual opportunity and success.